It’s been many weeks since my last post. That’s not to suggest that things have been uneventful. No, not at all. There’s been much I could blog about. I could talk about breaking up with my trainer. Yes, I’m being dramatic here. It’s amicable but it does feel like a break-up given how important he is to me, how intimate the relationship felt, and how the end meant suddenly we went from regularly seeing each other to not at all. And I could talk about how in the weeks following the break-up, I kind of fell apart, lost my discipline,  had some reckless eating days. Then dusted myself off, and started to pick up the pieces. See, it sounds just like a break-up doesn’t it? I’ll save that post for another day. 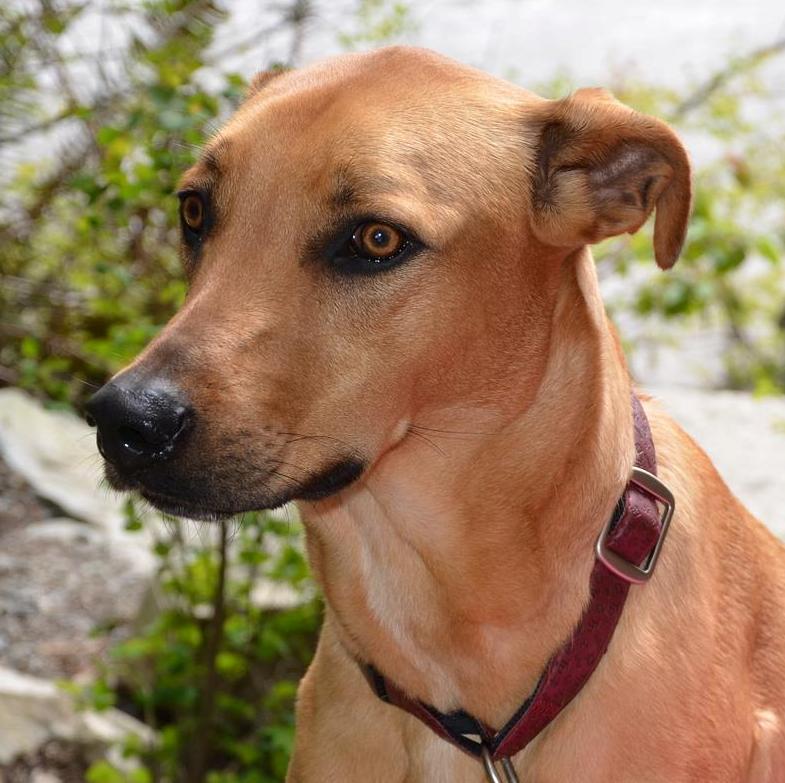 I could talk about a recent trip… so recent I’m composing this in flight and how I managed my food (I’d give myself a B, maybe a B-) and continued to exercise, discovering the hotel’s kick-ass gym, my shock & awe at what the Y considers reasonable for a drop-in swim, or doing one of my favourite things: travel runs! But… yes, I’ll save that post for another day.

Yes, I’ve had plenty to write about and the posts are “stacking up” so to speak and so I might as well go with the most timely one that won’t make any sense when it gets stale: my most recent race report.

Last Sunday was marathon number 3 for me: the BMO VancouverMarathon.  I had intended to run it last year when a TFL injury forced me to withdraw. After I finished wallowing in my pity party, I could look back with the perspective afforded by hindsight and discover lots of good that came of it… including meeting my trainer & finally shedding the weight. But anyway, this was the year for BMO.

At the beginning of the year, I identified running a 5:30 marathon as one of my goals. My first marathon time was 6:56. My second 6:11. So 5:30 represented another big drop in time.  As we approached the race date though, I recognized that I was heading into this marathon better trained than I’d been for any other race. My times had come down. My long runs were great. And I thought sub 5 was a real possibility. And that became the new goal. A few years ago, a friend told me about a conversation she’d had with an Olympic athlete. The athlete, a runner, had said that before every race she identifies Gold, Silver, Bronze finishes for herself as a means of assessing her performance – really, against her own abilities more so than everyone around her. Anything under 6:11 was a PR for me. That would be my Bronze. Under 5:30 would be my Silver. 4:59 or better, my Gold. 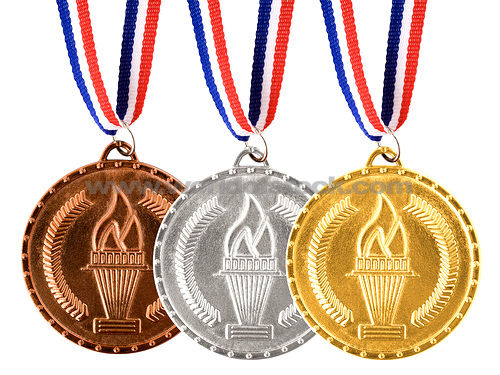 Anyway, the day before BMO, I had a leisurely morning. Worked on my playlist. Packed for my trip. Sought advice from Facebook friends on what to wear. Took a 20-minute easy run in the glorious heat wave we were experiencing. Hydrated, hydrated, hydrated. For dinner, I made a pasta dish I’d learned/tried at a cooking class earlier in the week. Delicious! And you can get the recipe here.

Race morning, I got up early, had hubby apply sunscreen to my back before he departed, then began the business of getting ready. Like my last race, I was doing this one without any buddies and it’s a different routine I’m learning on race morning. Quietly getting organized, collecting my thoughts vs the excitement of messaging back and forth before leaving for the race together. I had my usual pre-long run breakfast: oatmeal with almond hazelnut butter and a banana. And then my sweet son drove me to the start line. I’d grabbed a Solo bar to eat just before the start since so much time would have passed since breakfast. I know they say nothing new on race day but I figured this wouldn't hurt… and it didn't. As a side note, I tried Solo bars for the first time at the BMO Expo. Freaking delicious. No funky aftertaste. Total yum. Go get some.

Had a few good chats with other runners milling about and getting ready for the start. I was in the last corral of the marathon starters… and although I consider myself a slow runner, I couldn't help but think the corrals ahead of me held a lot of people who were totally delusional about what sort of time they could run. I always find it amazing that one can be so incredibly nervous pre-race. And yet, as soon as you step across that start line, the nerves are gone and you’re just doing your thing. 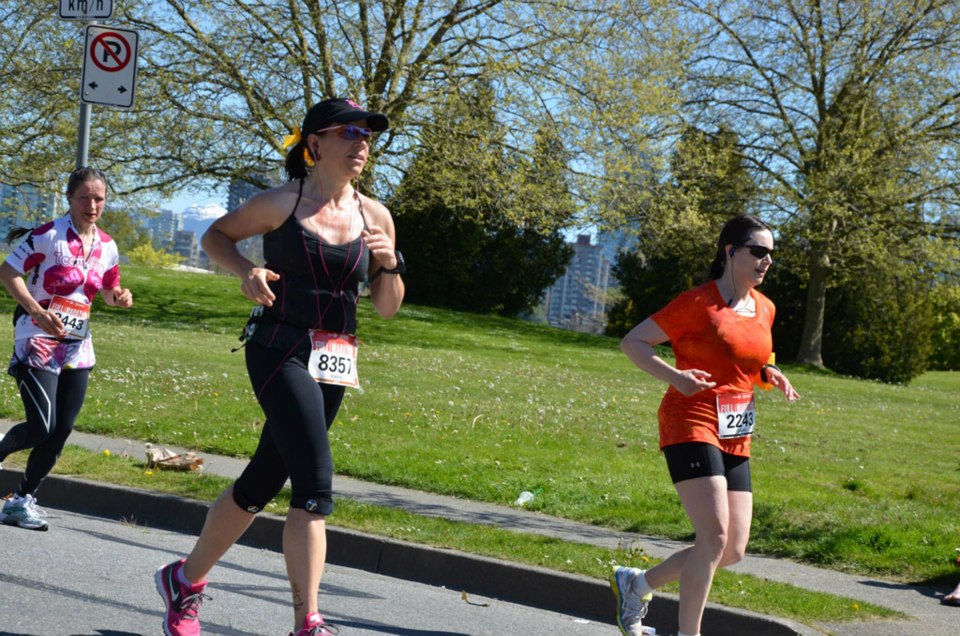 I had been back and forth on whether to try 10/1s for the race or to just run it, with walks for water & GU, or try a hybrid. I knew the 4:40, 4:45, and 5:00 pace bunnies were in my corral but I hadn't seen them. I assumed they were ahead of me in the corral so I figured if I could catch the 4:40, I would hang on as long as I could and then try to hold the 4:45 pace bunny - and if I felt strong, I could always pull away in the second half and abandon the walk breaks. At one point, I caught up to the 4:30 pace bunnies at which point it was obvious, the ones I wanted to run with were behind me. I couldn't hold on to these pace bunnies and I suspect they were running their group at a 4:10, which is pretty damn unfair to people hooking up with 4:30 pacers. I might scan some race photos to see if my hunch is correct. But I digress…

I didn't run with a pace bunny. I just did my thing. I walked the water stations (stopping at most but not all of them), taking 20 seconds or so to drink. I walked my GU breaks (4 in total, the first not until 1:30 into the race – that Solo bar held me a long time!). But otherwise I ran. And I ran every freaking step of Camosun! :-) 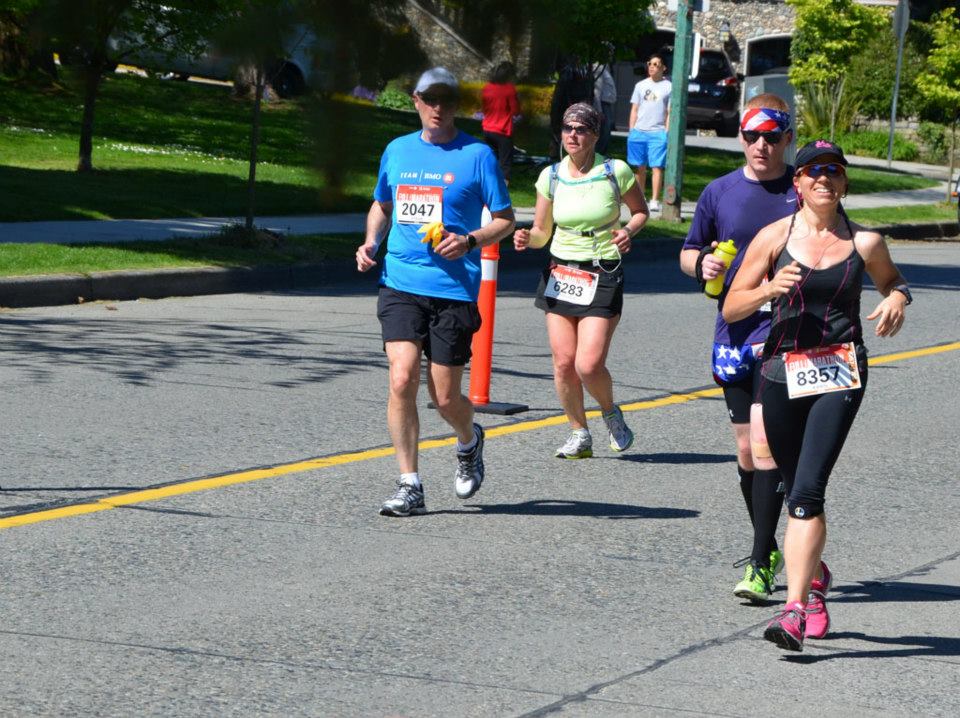 It was gloriously warm & sunny. I felt fabulous. Felt strong. And although the TFL was very aggravated (I scooped Tylenol from a medical station near Spanish Banks), it wasn't holding me back. Fantastic spectator support, great signs. A few favorites: 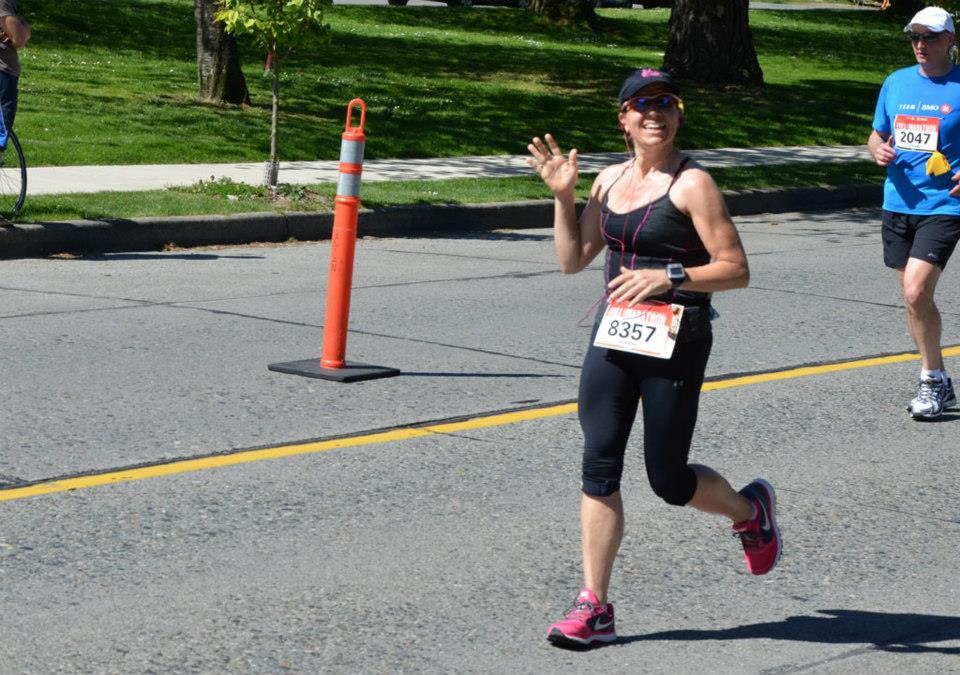 Now, both of my previous marathons were in Seattle, and I traveled down with a friend so this time, in addition to taking enjoyment from spectators and signs along the course, I also had the pleasure of seeing my wonderful & supportive husband throughout the course. He’d finished his volunteer stint, hopped on his bike and headed out to find me. It was so encouraging to see him. And it was like having my own personal paparazzi! 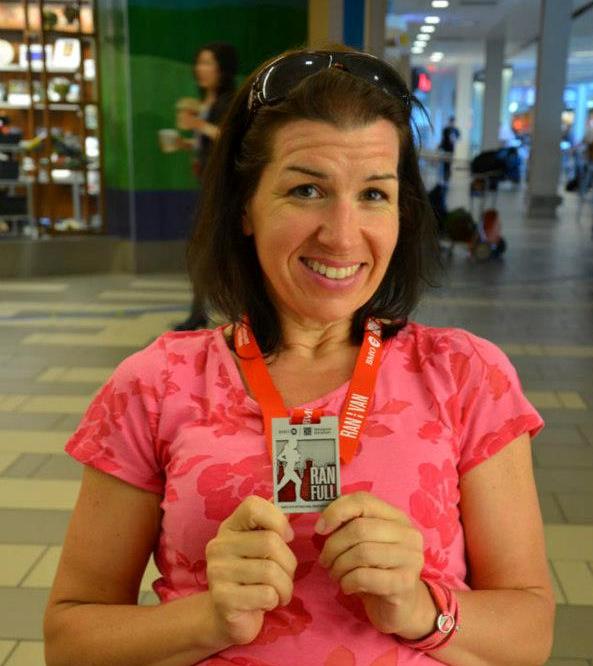 So, this has gotten very long, and if anyone is still reading, it’s probably with one thought: so what was your freaking time already? Well… are you ready for this: 4:31:52. Forget Gold, Silver, Bronze… that’s Platinum baby! I was totally blown away. In the top half of my age group & gender. I did run the second half of the race a lot slower than the first, but I’m still really happy with that result. And I've already signed up for #4, and with a new goal to target: 4:15.

After the race, I had to shower at a friend’s and then head straight to the airport for a 5 hour flight across the country to attend a conference. Word to the wise: that’s dumb. Not only was all that sitting a poor way to recover, it totally killed the post-race buzz!!

And lastly, marathonfoto sent out the link to view my race photos yesterday. I had a look through them – as one does – and then noticed that there are tabs across the top for the other BMO race events they've photographed. I clicked on the 2010 tab. Now, I’m going to share that link ...keep in mind, I’d already lost 55 lbs by the time I ran that race in 2010 so I was almost halfway through my journey.

After scanning the 2013 photos, then clicking over to 2010, all I could think was Holy Crap. And for a moment… a brief moment… I thought maybe I shouldn't be so critical of the pooch or the loose arm skin and just be grateful for what I've been able to accomplish. Because although I don’t have a perfect body, if in 2010 if you’d shown me a picture of my body today, I’d have said “Yes, please. I want that.”
Posted by Karin at 12:52 PM No comments: