So, yes. A race report. Sure, I’ll acknowledge that I’ve posted nothing, zip, nada, zilch since my September catch-up of my Challenge Penticton training, which ended with the promise of another post recapping what is by far, the most [insert pretty much any positive adjective here] race of my short racing life. And then crickets. Well, I don’t know what to say – except that well, here I am 3 months later, poised to write a race report for a different race. My bad.

But here I am, dear reader(s), ready to wax poetically, about my first 25K trail race: the Deception Pass 25K.

Now, I’m no trail runner. My only real trail race has been leg 5 of Meet Your Maker in 2013. I ran a 12K leg, and loved it! I signed up for this race based on loving that experience, loving the breathtaking scenery at the Whidbey Island Marathon in April of this year, and a little peer pressure. And by a little peer pressure, I mean a friend shared on Facebook that she had registered and said “join me!” Ummm, OK!

So for the last 2 months or so, I’ve been hitting the trails for my weekend long run, appreciating the importance of picking up my feet when I run, coming to terms with the fact that I suck as much running downhill as I do riding downhill, and trying hard not to compare my slow pace on the road with my ultra-slow pace on the trail. 45 minute 5K anyone? Based on that average pace on the trail, I set my goal for race day at < 3:45… And that’s what I pinned up on my office bulletin boards to visualize my goal… set against a backdrop of the beautiful, panic-inducing Deception Pass Bridge… < 3:45. But trail pace is so dependent on the trail itself, so a few days before race day, I looked up last year’s results and checked the median time for women in my age group: 3:26:something. OK, that’s the goal, get under that.

In the weeks leading up to race day, the weather had offered everything. Freezing cold with a bit of snow. 22-32km/hr winds (a treat when we did our recon run 2 weeks prior). Unseasonably warm. Wet beyond belief. Take your pick! I packed [almost] everything clean from my running drawer. Race morning weather forecast was pretty moderate, nothing that would prove a performance factor… about 7 degrees, 9 km/hr winds, and 0-2% POP. I opted for no hat. Not cold enough for a toque. No need for a ball cap if there’s no rain. I love running hatless. And it rained for a while… just to prove a point I think.

So the race itself. Well this setting is beautiful. Really spectacularly beautiful. It’s a shame you have to spend so much time focusing on where to land your next step because it affords you few opportunities to look up and just take it all in. The view from Rosario Head was my favourite. Stunning! Just stunning! 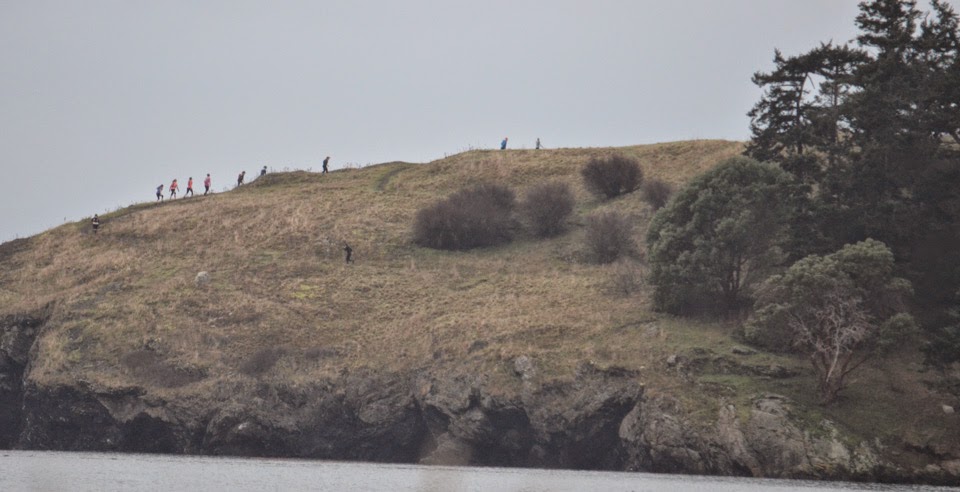 Before the race started, we were all warned that the storms in the days prior to the race had made things slippery – and to heed the caution signs (Caution, slippery! Caution, cliff!) ...and basically to be nice to one another. People seemed to take this advice to heart – which I found a little frustrating! The race starts with a climb up a relatively steep hill, on the road. I ran all the way up, rounded the corner, to make my way back down, on the single track trail instead of the road, only to find that after running to the top, we were now walking single file for the first stretch of downhill. Argh! The single track offered no room for moving around anyone, and with the pre-race advice, and being a good Canadian girl, I just stayed on the heels of the person in front of me and waited until the first opportunity to get some space to pass. This is a pattern that repeated itself through the first 10 km or so. With lots of single track, and lots of lollipops, congestion was an issue. It wasn’t until I was through the aid stations that I really felt like, for most (but not all) of the rest of the race, I was running at my pace, and not the pace allowed by the person in front of me. 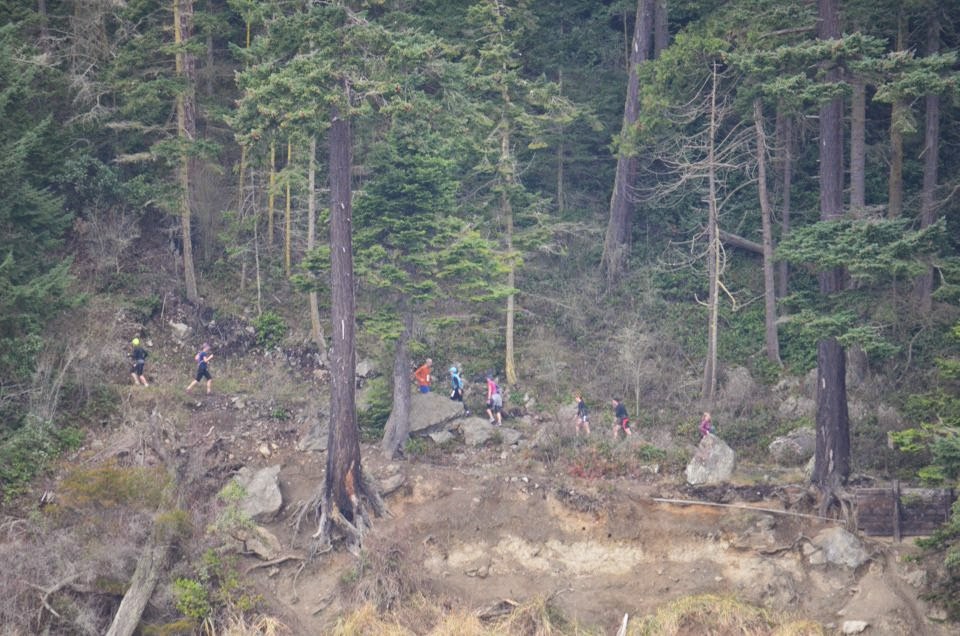 The trail itself was fun. Not as technical as Buntzen but you certainly needed to watch your footing, and lots of rolling terrain with some really good climbs, and a lot of downed trees to navigate. I felt like all those hill workouts were paying off, running much of the climbs (unless negated by the crowd in front). On the Pass Lake Loop, I ran about half of the climb before stopping and walking because it was so slippery and mucky, seizing the opportunity to get down a gel. I ran most of the first part of the climb up Goose Rock Summit, then after the downhill switchbacks, when it got really steep, I was relegated to walking. But walking with gusto, I powered past a ton of people in front of me. And despite my general suckiness on the downhill, up until the last descent, I’d only been passed once – and coming down from Goose Rock, I had about 6 folks pass me. I overtook 5 of them later on one of the easy climbs in the last 5K. 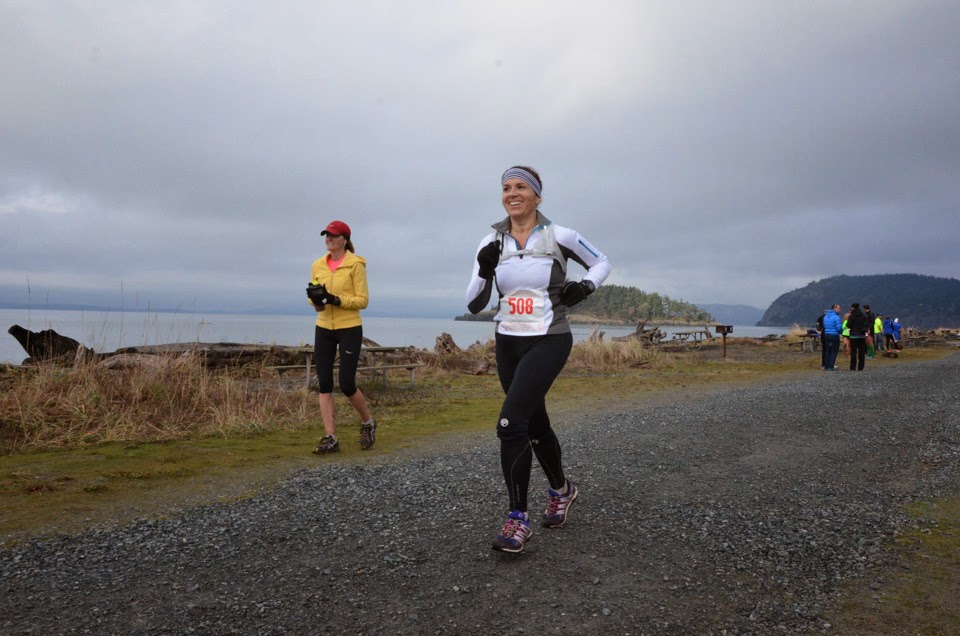 I finished tired, feeling spent, and in a disappointing 3:27:14. 27th out of 60 in my age group this year. A friend sent an encouraging text after that I should be pleased to finish in the top half given this was my first real foray into the trails. Unfortunately – with the exception of Challenge – this missing of my time goal by just enough to demonstrate I have the ability to meet it is a disappointing trend this year. I don’t know if it’s poor pacing or an inability to suffer out there that’s behind it, but it’s annoying as hell, and something I need to address in 2015.

Despite being disappointed in my performance, and needing to strategize better on a single-track course, I really enjoyed this race. Rainshadow puts on a great event. And they've got great volunteers & spectators making the day fun. 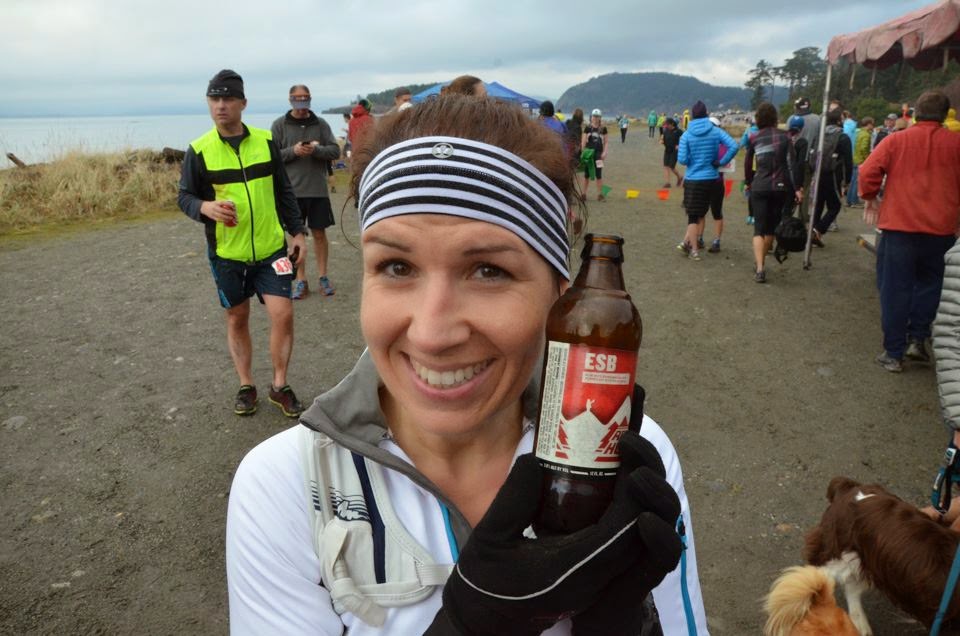 I enjoyed the beer at the finish (and then enjoyed again… and again), and that they had some vegan munchies.

I’m looking forward to running another Rainshadow event, although hearing some of the chatter out there, I have to wonder if Yakima was the right race choice to bridge Napa and IMC!

Next up: AIK’s Generation Run 5K on New Year’s Day.