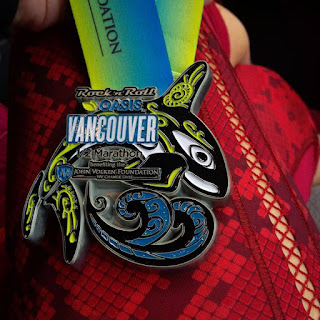 I’ve written before about my goals. So when I sat down tonight to articulate in black and white the goals for 2017 that had been forming in my mind as 2016 came to a close, I took a moment to revisit my previous goal declarations. Some of them are still out there waiting for me… like swimming 2000m “unassisted” in the pool in 50 minutes. Some are goals I’ve achieved and set year-in and year-out …like that marathon-a-year thing. And some I look back on fondly as I remember how hard-fought they were… like that sub-2 hour half. Oh yes, I finally crushed that goal. It was in the 18-month blog silence, after missing three times by seconds… yes, SECONDS…  I knocked that monkey off my back with a 1:57:39 at the Vancouver Rock’n’Roll Half in October 2015. I should have posted about it… about the emotional turmoil race morning where I ducked between two buildings on the way to the start, to cry, sobbing to the hub “I keep telling myself that my worth as a person isn’t dependent on whether I can run this under 2 hours but… but… but I just don’t believe it!” Oh yeah… I was in fine form. Anyhoo…

1.      Post on the blog at least once a week, every week. An intention declared in my last post, when I turned the lights back on here. I’m going to stop writing them in my head. I’m not promising that they’ll be interesting, funny, or insightful… but there will be something!

2.      #17in17.  17 new experiences in 2017. I’ve set a similar goal before, focused on new experiences in the year, but never this many. Last year, a good friend was pursuing a goal of 50 new experiences before her 50th birthday. I joined her for many of these… some terrifying & crazy… like trapeze school. Yes, I’m serious.

3.      Ride >= 8000 km
No, not in one go! Normally I set a run mileage goal but after an injury plagued last year, I’m inclined to set myself up for success by focusing on bike mileage instead… something maybe a little less likely to land me on the injured list right out of the gate. Last year I rode 6144 km, which was a big jump over 2015 (4530 km). Well, this girl’s got a new bike and she’s not afraid to get out on the road with it! Just kidding… that was tough talk. It’s snowy and cold outside. But between the road and my Kickr, 8000 km is the goal.

5.      Continue my streak of running a marathon at each age of my post-40 life. If this is going to be a 2017 goal, then I’ll need to run that baby between June and December of 2017. I’ve got my eyes on the Honolulu Marathon in December. (On an unrelated note, I’m also hoping for a visit from the money fairy.) 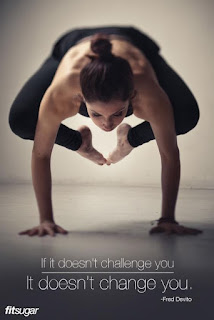 6.      100 hours of yoga. 55 hours of yoga in 2015. 82 in 2016. I think 100 hours is totally doable, especially without the time burden of Ironman training this year. Shout out to Believe, my epically fantastic yoga studio. A beautiful space and wonderful teachers with enough yoga variety to host you on your mat, no matter what you’re needing.

7.      Master crow pose. I’ve been wanting this for a while. Not enough to actually do the work and be intentional. But that’s probably just because it was waiting to help round out my 2017 list at 10 goals, right? #Believe.

8.      Crack 25 minutes in a 5K. I wanted to avoid focusing on outcome goals (and yes I know mastering crow pose is an outcome goal) because man, they can really eat at me. I don’t want to find myself crying before every start line because I think I’m going to fail and make my own “people who suck” list, but… I also want to push myself. To feel hungry for something. And this something means I have to get back to the run shape I was in before the 5-calf-injury-year (yeah I didn’t write about that either) and find 12 seconds over 5K. I’m up for it. And I’ve got 6 5K races already signed up and waiting. Oh, and just in case you’re on the edge of your seat, this is more likely to happen at the 6th than the 1st race. You might want to get a snack.

9.      Really, actually train, with focus and see where that takes me. I’m not sure I’m articulating this very well. I’m really good at following my training plan and checking the boxes next to the workouts. Yup, did it all. I have not been so awesome at listening to my body. If it tells me it doesn’t want to do something, I will usually tell it to stop trying to be a slacker, and I do the workout anyway. Even if it means running on a calf that was torn that morning. Hashtag stupid. And I have shied away from sessions where I feel “less than”… like coached swim workouts, where I felt self-conscious for being the slowest person in the pool, electing to swim on my own, without the watchful eye and needed instruction of a swim-coach on deck. This year, I will listen to my body and try to train smart (I’m experimenting with an app called HRV Training which I’ll post about another time), to avail myself of opportunities that can make me a better athlete (no matter how scary), and to make the hard workouts HARD and the easy workouts easy. And then there’s the whole sport fueling thing. I’m going to pay attention to that too.

10.   Give meditation a go: at least once/week for 20 minutes. I’ve tried meditation a time or two and honestly have joked that for me, it’s facilitated napping. But there’s so much out there espousing the benefits of meditation that I’m going to be approach it this year with an open mind and a willing heart. What’s the worst thing that could happen? Another 17 hours of sleep this year? Not a terrible thing.

Well there they are. I’ll check in throughout the year to update you on my progress. And with this post, I’ve got #1 well in hand. 51 to go. I hope you’ll still be here!