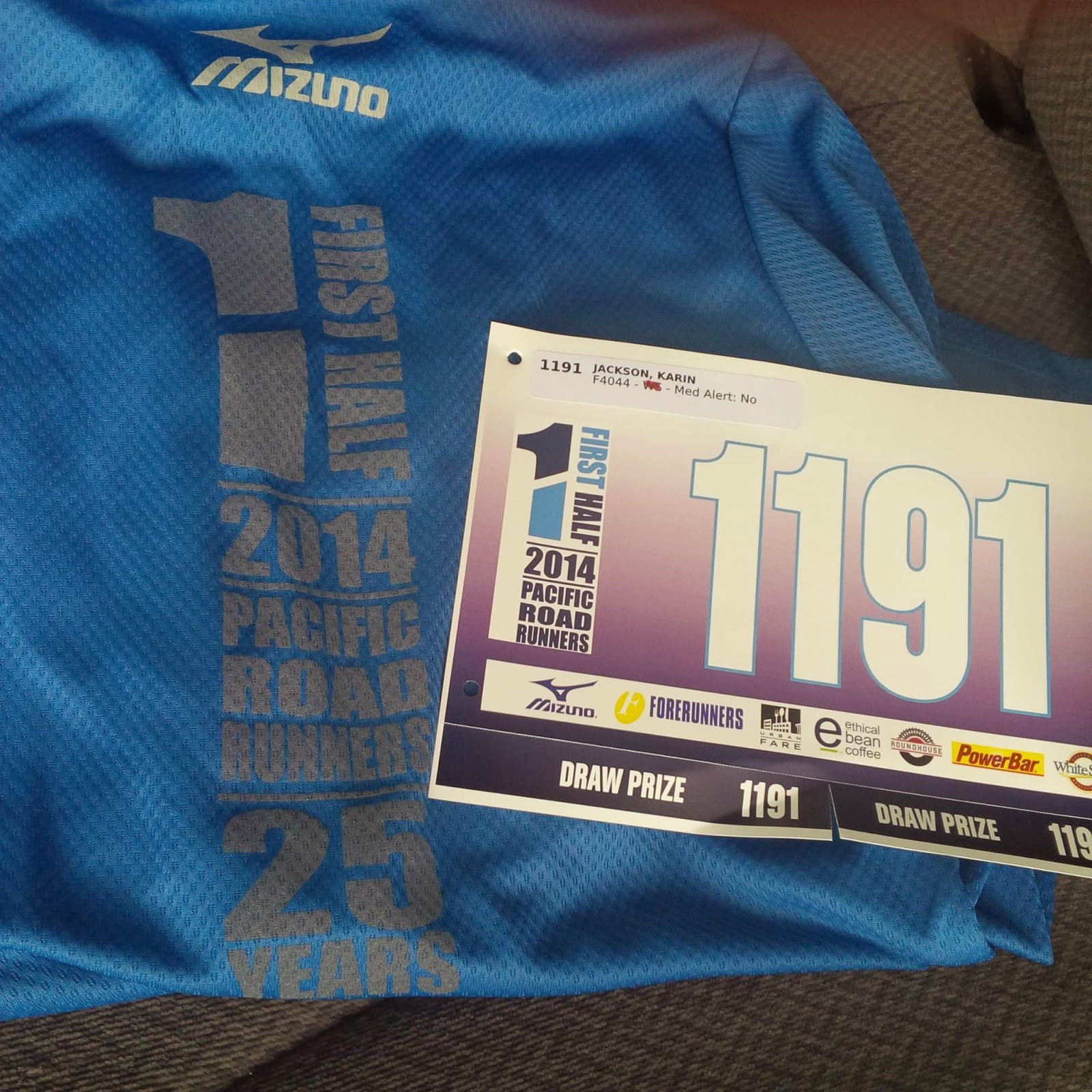 So tomorrow is race day. With the help of Coach Eric, I've been training since mid-November for Vancouver First Half aiming for a sub-2 half. I wish I could say that the back is fully recovered and that I was confident it won't be a problem tomorrow. It was stiff this morning, a little worse than Monday night, following a week of sitting at work. I had a spasm when I went to get off the couch with my morning coffee and it was a little tender during my swim. Movement is key though, so that's what I did all day. A little post-swim stroll around the market. Came home and did a short 3 km test run, my first in 10 days. Spun for a while on the trainer.

My test run was not the awesome confidence-building-reassurance-that tomorrow-will-be-fine run that I was hoping for. There was pain. There was tingling running down the right leg. It occurred to me as I was running that there's a possibility that if I stop for water or take a walk break to gel tomorrow, my back may seize up and I won't be able to resume running. So I started thinking about what my race day strategy might be. I can do 21 km in the pouring rain with no water. Heck, I can do 21 km on a dry day with no water if it's cool out. Come to think of it... I don't think I've hydrated during any of my long runs! As for the gel, if I feel like walking may keep me from running, well I'll just keep running - maybe try to gel on the go. But I can figure that out during the race. I finished my little 15 minute run with a few striders and those actually helped. Almost like a do-it-yourself ART. So, some warm-up striders are going to be a good thing.

One thing that surprised me today was my pace. Fast for me. I was averaging 5:31/km and telling myself to slow down but that's just where I was comfortable for the wee run I was out for. That could be the difference between what's comfortable now after 2-weeks of 1800-calorie averages per day (yes, yes, I know, I promised an entry on Thrive and my vegan experiment... it's coming!) vs all those weeks of 1100-calorie averages. So... am I feeling sure of sub-2 tomorrow? Not at all. Am I feeling sure of a PR tomorrow (better than 2:04:05)? Not at all. Do I think I'll at least finish? Really, how my back was today, it could go either way. But I'm certainly going to give tomorrow the best that I have in me tomorrow - and at the same time, listen to my body. My always supportive and wise Coach Eric sent me a note today reminding me to keep in mind that "most records (world or personal) are set when YOUR body is ready not when the race director picks a date for the event. Run hard but run smart, knowing you can PR when you are ready to PR."

Despite the flakey back and the forecast for tomorrow, torrential rain & wind (I mean really, who would pass up an opportunity to run in such stellar conditions?), I'm looking forward to a good long run and a post-run massage from my fabulous friend and RMT-in-training. No race-night Ben & Jerry's reward since I'm doing this vegan thing but I'll just have to think up another treat. Or find someone to make this for me. Tomorrow.
Posted by Karin at 8:00 PM No comments:

My Road to Challenge: Training Week 12 of 40

The disk issue that I mentioned in my last entry raged on. I tried to train through it, minus the weights, and then hobbled in to my chiropractor on Tuesday after work, searching for relief. After a painful adjustment that brought me near tears, he advised: no running, no weights, come back in 2 days. Thankfully I’d done the longest planned run of the week at lunchtime. It aggravated my back – but it would prove to be the only training run I’d get in that week. Since the bike, swimming, and yoga were still on the table, on Wednesday I did all 3. When I headed back on Thursday, I was still hurting, but the numbness traveling down my legs wasn’t as bad. I was dressed for my favourite yoga class of the week, ready to head there after my appointment. After an honest answer to how swim, bike, yoga felt on the back, yoga was taken off the table.  And have I mentioned that my trainer challenged me to make February a dry month? Man, could I use a glass of wine!

Saturday morning, I went to the club swim. Disaster! Single arm drills twisted my back and caused it to spasm. Catch-up drills caused my hips to sink and that aggravated the back. The whole swim was a struggle. Woe is me! Thankfully, it was a beautiful – although cold – day and I went for a late morning hike with my husband. It was great to be moving, very therapeutic. 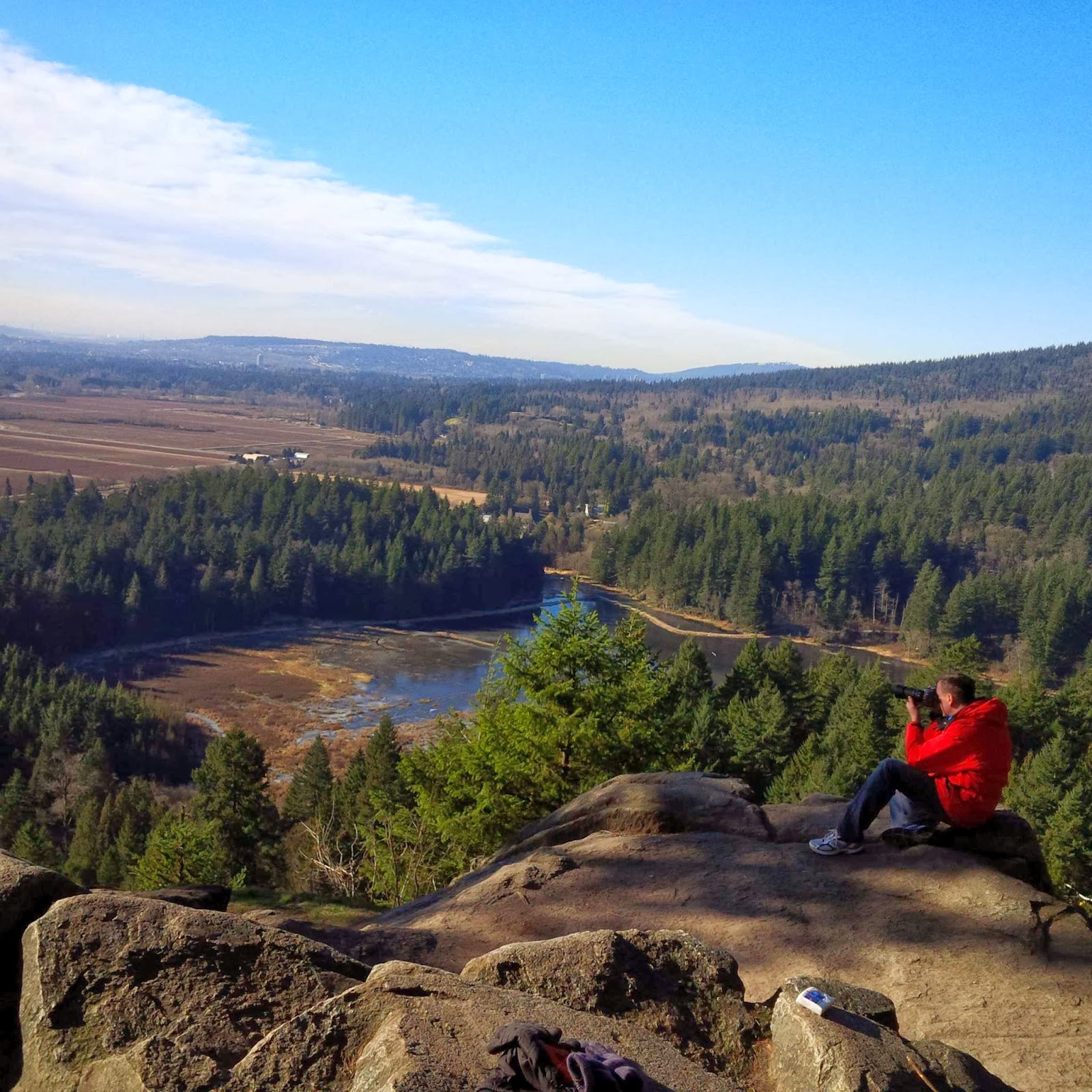 When I returned to the pool the following day, I did my whole swim with a pull buoy to keep my hips up and came out of the water with my back happier than when it went in. And with nearly everything else off the table, if this made my back happy, I'd plan to do more of this.

In my last entry, I mentioned an experiment with the Thrive Forward 7-DayNutrient Dense Menu Plan. It was a great success… worthy of its own entry. J
Posted by Karin at 8:19 PM No comments:

My Road to Challenge: Training Week 11 of 40

Week 11. On-call. Lower numbers than I’d like but that’s a reality of on-call weeks I think. I've been playing around with how best to manage training when on-call. There are a few things I did right and a few things I’ll change next time. What I got right: a yoga class on the Monday night; my “long” run of the week early Tuesday morning; a lunchtime swim on Friday.  What I’d do differently: make sure I got a swim in on Monday; play with my schedule so that I’d do the following week’s spins during on-call week so that I could swap swims & spins from a scheduling perspective; and my back was all flared up by week’s end so even though I’m opting (mostly) not to go to yoga with my Blackberry while on-call, I could be doing some yoga at home to keep everything in good working order.

Not related to on-call, Monday I opted to sleep in instead of doing one of my planned strength workouts, pushing it to the weekend. Unfortunately, by the time the weekend arrived, I was having disk issues and weights were ill advised. I opted for TRX instead – less chance of getting injured. But this was a good reminder not to postpone workouts, because I don’t know what’s waiting for me later in the week.

I spent a lot of time on the trainer this week and in the process have become completely hooked on Breaking Bad. It’s been turning my 1:30 spin sessions into 1:40 spin sessions because that’s how long it takes to watch 2 episodes. Ha!

I remain frustrated in my attempts to drop some weight. Despite training as much as I am and restricting calories to an average of 1100-1200 a day, I’m holding steady. So in an attempt to change things up a bit, I’m trying the Thrive Forward 7-Day Nutrient Dense Menu Plan. Really, I am not expecting to drop any weight with this. I do expect that it will make me feel good and be a little more even tempered (read “less bitchy”). But my trainer has been nagging me to eat more, arguing I can’t lose anything because I’m not eating enough. Riiiight... I enjoy proving him wrong and I expect after a week, I will have gained 5 lbs and my husband will have dropped 10. As a side note: don’t expect the even temper to continue after that!!

I will say that 2-days into this, the food is delicious! Have changed up the order of the days a bit so Day 1, then Day 5. I've missed a snack on each day just because I haven’t had time but wow, these recipes have all been winners.  Broccoli Slaw Salad (made with pear, not apple due to allergies), Tart Cherry Balls, Mango Lime & Hot Pepper Smoothie, Sweet Potato Ginger Soup, No Bake Chocolate Pie… just some of the favourites so far. Shopping for all these obscure ingredients and figuring out how to prepare everything, not to mention washing (and rewashing and rewashing) my blender is a bit tedious. Let’s see how manageable this is through the work week.