In 2010, I ran my first marathon. It was the Seattle Rock & Roll Marathon. I ran it just 11 days after my 40th birthday and when I was done, I declared that I would never run another marathon… in Seattle. That’s right, I didn’t swear off the marathon as a one-and-done adventure - quite the opposite in fact. I decided I’d run a marathon every year after, for as long as my knees would let me. But Seattle… the hill factory that it is… well thank you, but no, I’ll count my miles and earn my medal somewhere else.

Yet somehow, 2011 saw me eating those words as I returned to Seattle in November to run the Amica Seattle Marathon. On a wet and windy day befitting November in the Pacific Northwest, on a much hillier (but also more scenic) course than the RnR event, I cranked out my second marathon. Shivering cold and mentally apologizing to my knees, I said it again, this time with feeling: I will never run another marathon in Seattle.

So how is it that I came to find myself yesterday, at the start line of the Amica Seattle Marathon, on another typical PNW November day, ready to roll through 26.2 miles of a new and improved, 25-30% hillier, Seattle marathon course? Well, recall that declaration that I’d run a marathon a year every year from my 40th onward? At the start of the year, I had decided that for my 47th year, I’d run the Honolulu Marathon, but then subsequent to that I made the decision to race Challenge Aruba with my TRS Racing - Baucco Squad teammates and well, I couldn’t justify Aruba and Honolulu trips in the same year, and so …hello Seattle.

I knew going in to the race that there was no PB on the line. I’m only about 6 months out of an 18 month period that featured 7 calf strains, the last one occurring in the Spring of this year, and so I have been slowly, cautiously, (nervously) building the distance that I can run through mostly flat, easy paced runs. I added a bit of rolling hills and a couple of track sessions in the early Fall, but I have a long way to go to regain my previous version of fast, let alone aim for faster. So with the pressure off to be fast, I was feeling pretty relaxed for race day.

My chill attitude about the day had me not trying to control everything quite so much as I normally would. The night before the race, we had dinner with a couple of friends, at a cool downtown Seattle restaurant that has no set menu but just asks what you like and what you don’t, and then serves up a multi-course meal to suit your tastes and dietary needs - wine included! Happy vegan, right here. Check out Pasta Freska next time you’re in Seattle and looking for a tasty Italian meal. 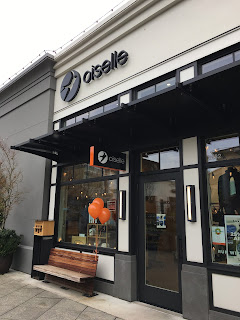 The weather forecast was calling for non-stop rain and so I found myself at the Oiselle store, yes, cue the angels singing, looking for a rain jacket that would breathe, but trying on [almost] all the items I’ve ever eyed online but wondered about fit. Everything new on race day? Not quite, but almost. No, I’m not kidding - I raced #flystyle in brand new Oiselle pocket jogger tights, wazzie wool base layer and vim jacket.

Yes, I was breaking all the pre-race rules, and feeling no pressure for time. I was a little concerned about my unconventional build for this. I did most of my build in August & September, before tapering for Aruba. The weekend after we got back from Aruba, 2 weeks after the half ironman, and 5 weeks after my previous distance building long run (29K) I did my longest training run for Seattle (32K), and then began to taper. So, I knew this marathon wouldn’t be fast, and that it was going to be a tough day, but I felt like I had enough miles in me to go the distance, as long as my calves held up through the up & down of Seattle’s hills. Honestly, I hit that start line just feeling so grateful to be able to tackle a long run like this again. With no need for speed, my goal was to follow Devon Yanko’s lead from Leadville and be the happiest person out there, running with joy and a spirit of gratitude.

And what do you know… it worked! When it was rainy & windy at the start and through the first few 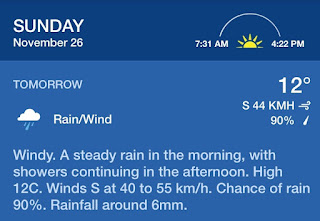 miles, I reminded myself how lucky I was to be able to do this (again). When the rain stopped and the sun came out, and I got to really enjoy the beautiful sights of Seattle, the gratitude came easy. When runners cut me off at aid stations or threw their half full cups of water behind them towards trash cans without looking to see if anyone was there, I had to work a little harder at it. When the skies opened up and the rain came bucketing down so hard that the cops manning the road closures scrambled for their cars, and I struggled to get my jacket back on while the wind was whipping it and threatening to blow it right out of my hands, I laughed and reminded myself that racing in ideal weather conditions hasn’t really been my “thing” the last couple of years. Ironman Canada 2015, I’m looking at you. When the hills before and in the Arboretum were kicking my ass, I thought of a very good friend who is sidelined from 2 planned marathons next month as she recovers from a serious illness, and appreciated how lucky I was to be there, no matter what my glutes and hips were telling me.

And so 4 hours and 51 minutes after starting, I cruised across that finish line, feeling joyful, grateful and more than a little bit soggy. Not my fastest (by a long shot), not my slowest (by an even longer shot) but still one to smile about. Isn’t every finish line? OK, maybe not those sub-2-half quests that I kept missing by seconds (seconds!), but we don’t talk about those. In the warm indoor finish area after (yes Seattle, you do that right!), they were selling finisher gear and "vintage" race shirts. I always wondered who would buy a race shirt from a previous year, no matter how good the bargain? Wondered until yesterday when I saw the 2011 finisher shirts for $2. When I ran this race in 2011, I had to squeeze into an XL. It's um, maybe a little too big now?  I still wear it, as pyjamas (hella sexy no?) but yesterday I thought it was a good opportunity to "downgrade" to the S. And hey look, my boobs magically got bigger! 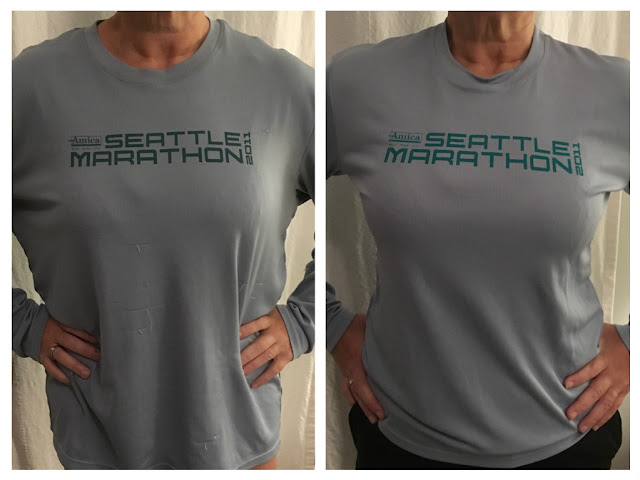 Thanks for marathon #6 Seattle. Now don’t stop me if you’ve heard this before, because I really mean it this time: I will NEVER run another marathon in Seattle! It’s not me, it’s you. You’re just so damn hilly! And does every step need to be on pavement? 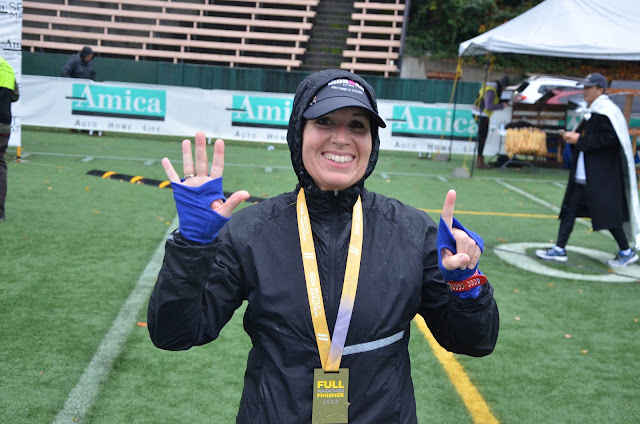 Next marathon? The run at IMC in 2018. Next open marathon? I signed up for Portland less than 24 hours after hitting the Seattle start line. Hoping to find a little more speed for that one, but just as much gratitude.